The Bent Bullet: JFK and the Mutant Cospiracy

Marvel has created a site called The Bent Bullet, a promotional website and video that weaves X-Men mutants in with a JFK conspiracy theory, blending the real and fictional in a quasi sort of alternative history genre getup.

A new viral site promoting the upcoming X-Men: Days of Future Past has hit the web: The Bent Bullet, which explores President John F. Kennedy’s assassination — with an unfamiliar twist.

According to The Bent Bullet site,  which went up last night, Kennedy was assassinated by Lee Harvey Oswald — with the help of Magneto (played in his young incarnation by Michael Fassbender in the movie), who allegedly used his powers on Oswald’s wild shots to ensure the president’s death. This, it seems, will be the incident that splits the X-Men timeline, triggering the dystopian Days of Future Pastuniverse, in which mutants have been rounded up in internment camps and systematically exterminated with the aid of robotic Sentinels. 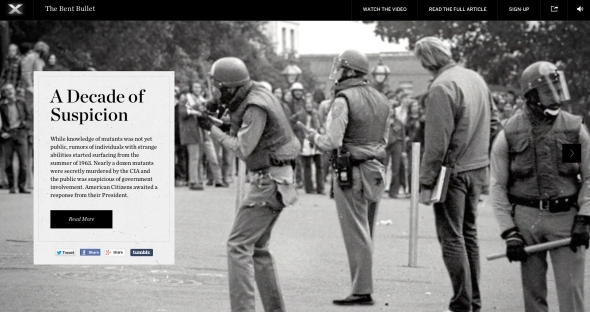 But has Magneto been falsely accused? Fictional journalist Harper Simmons seems to think so — and both Magneto’s own testimony and circumstantial evidence point to Mystique (Jennifer Lawrence) committing the assassination while disguised as Oswald, then slipping away and leaving the real Oswald to take the blame. However, it’s unclear whether she did so on Magneto’s orders, or acted autonomously following a schism in the Brotherhood of Mutants.

Like the rest of what we’ve seen of Days of Future Past, the movie’s take on the trigger event is based very directly on the comic, with some major modifications. In the original story, the assassin was Mystique, leading an autonomous brotherhood — but her targets were Charles Xavier, Moira McTaggart, and hardline anti-mutant senator Robert Kelly, whose cinematic counterpart died in 2000′sX-Men and was later impersonated by Mystique. 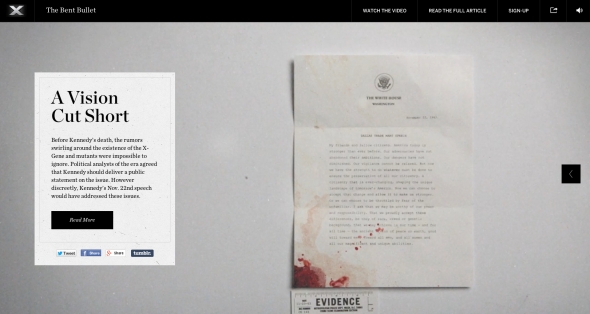 To find out just how closely the rest of Days of Future Past adheres to the comic, will have to wait until flick hits theaters May 23, 2014 — or they’ll have to hope more of these teaser sites are on the way.

Using a Panasonic GH2, Dutch filmmaker Jeroen Wolf captured people ranging from 1 year young to 100 years old. It’s simple—the person stares at the camera at states their age—yet incredibly touching to see the growth and experience you earn as the years add up.

Wolf actually started the project last October by documenting people in Amsterdam but the project petered out because it was difficult to find very young and very old subjects. Wolf says:

“I found my very old ‘models’ in care homes and it was a privilege to document these—often vulnerable—people for this project. I had particular problems finding a 99 year-old. (Apparently 100 year-olds enjoy notoriety, but a 99 year-old is a rare species…) And when I finally did find one, she refused to state her age. She simply denied being 99 years old! But finally, some 4 months after I recorded my first ‘age’, I was able to capture the ‘missing link’ and conclude this project. “

Fantastic Delites – How Far Would You Go?

A Coca-Cola delivery truck is converted into a happiness machine on wheels delivering “doses” of happiness in the streets of Rio De Janeiro, Brazil. Where will happiness strike next?

Just Dance is the fun dance game series that anyone can pick up and play. But until now, the audience has been limited to teenage girls. For the launch of Just Dance 3, the brief was to expand the audience, with no media spend.
To promote the release of Just Dance 3, Crispin Porter + Bogusky created Autodance, an app that proves anyone can Just Dance. Simply record your friends doing stuff and the app syncs their movements to a choice of dance tracks from the video game. Like magic, your friends will be shaking their stuff in a branded music video that can be shared online.

Autodance is more than just a fun app. It’s a fun tool to get people to make and share our ads for us. Each user-generated video acts as an advert for Just Dance 3, and features our tagline “Anyone can Just Dance”, along with an end card for the game.
The app proved so successful it’s now been incorporated into Just Dance 4. 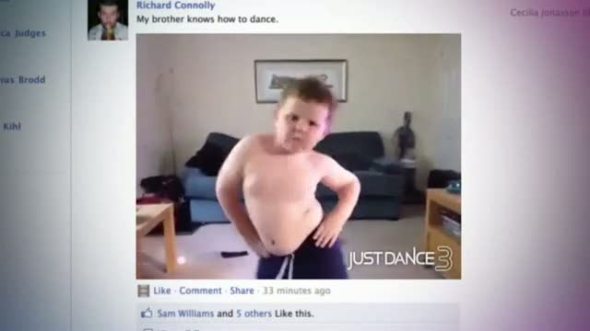 With no media spend, Autodance exposed Just Dance 3 to a new audience of millions. And over Christmas 2011, Just Dance 3 became the best-selling video game in Europe.

This new animated spot for Diesel through Vice and Blinkink London and directing team Jonny & Will is a rather risque call to arms…According to the ancient Mayan calendar, December 21st 2012 marks the day the Earth will be destroyed and all human life will cease to exist forevermore. So, if the rumour is true and 21-12-2012 really is the day it all ends, surely there’s only one thing to do? 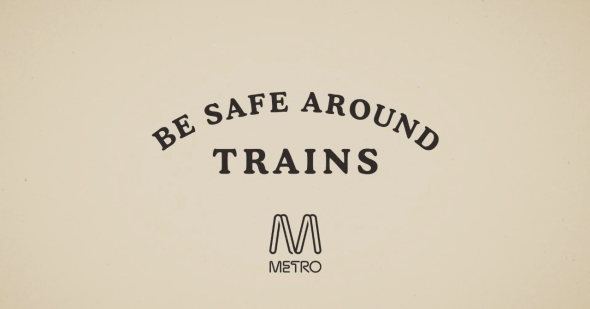 “Dumb Ways to Die”, is an integrated advertising campaign designed to curb the number of train-related deaths in Victoria. The campaign is centred around a three-minute animated music video, highlighting the many dumb ways there are to die, with being hit by a train – a very preventable death – among them. The video and iTunes single are accessible online at DumbWaysToDie.com, with animated gifs being released on Tumblr, on radio, in posters on small and large space outdoor and throughout the Metro Trains network, with the lyrics to the song on the art work.

The Idea: Safety PSAs are gloomy and tedious and largely ignored by young people hardwired to resist them—except when they’re irresistibly fun and impossible not to share with friends. McCann Australia managed just such an evolution of the genre with “Dumb Ways to Die” its animated train-safety spot for the Melbourne Metro. The three-minute music video shows adorable blobs making the stupidest decisions ever—messing with animals, sticking forks in toasters, eating superglue, etc.—leading to all sorts of gruesome, fatal accidents. The dumbest way to die, the ad suggests at the end, is by being careless around trains. “The idea for a song started from a very simple premise: What if we disguised a worthy safety message inside something that didn’t feel at all like a safety message?” said McCann executive creative director John Mescall. “So we thought about what the complete opposite of a serious safety message would be and came to the conclusion it was an insanely happy and cute song.” With more than 30 million YouTube views, it seems happy, cute and grisly was the way to go.

The Song: The song begins, “Set fire to your hair/Poke a stick at a grizzly bear/Eat medicine that’s out of date/Use your private parts as piranha bait,” before the chorus repeats the two lines, “Dumb ways to die/So many dumb ways to die.” Mescall wrote most of the lyrics in one night at the agency. “It then took a few weeks of finessing,” he said, “getting rid of a few lines that weren’t funny enough and replacing them with new ones.” The line “Sell both your kidneys on the Internet” was a late inclusion. “I’m glad it’s there. It’s my favorite,” he said.

Australian musician Ollie McGill from the band The Cat Empire wrote the music. “We basically gave him the lyrics and told him to set it to the catchiest nonadvertising type music he could,” said Mescall. McGill delivered something almost unbearably catchy. “The melody is easy to remember and sing along to, the lyrics are fun, bite-sized chunks of naughtiness, and the vocals have just the right amount of knowing innocence,” Mescall said. “It’s a song that you want to hate for living in your head, but you can’t bring yourself to hate it because it’s also so bloody likable.” The singer is Emily Lubitz of another Australian band, Tinpan Orange. (The song is credited to Tangerine Kitty, which is a mashup of the two band names.) “Emily brought a great combination of innocence, playfulness and vocal integrity,” Mescall said. “She brings a level of vocal quality you don’t normally get on a video about cartoon death.”

The Art Direction: Australian designer Julian Frost did the animation. “We gave him the most open brief we could: Just make it really funny and really awesome and do it to please yourself,” said Mescall. The visual reference points ranged from Edward Gorey’s The Gashlycrumb Tinies to Monty Python’s “Always Look on the Bright Side of Life” (which showed men singing while being crucified) to “any number of hokey indie music-video flash mobs you see on YouTube,” said Mescall. 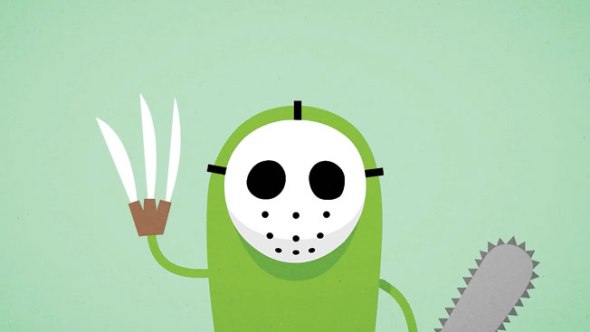 “Julian was keen to contrast the extreme situations described in the lyrics with the simplest animation possible. Otherwise it would become just too much.” After the spot blew up online, Frost wrote on his website: “Well, the Internet likes dead things waaay more than I expected. Hooray, my childish sense of humor pays off at last.” 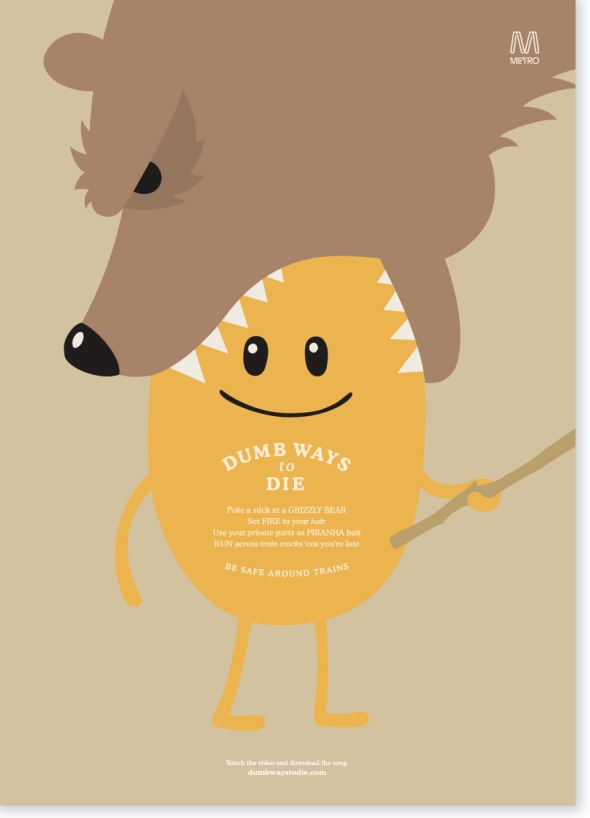 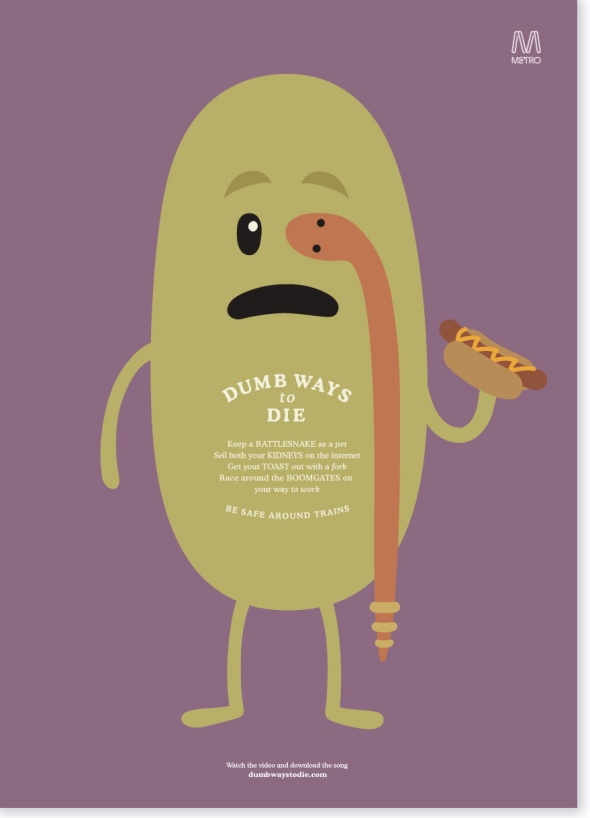 The spot lives online, in short bursts on music TV, and may reach cinemas. The campaign is also running in radio, print and outdoor. The song is on iTunes, where it reached the top 10. The agency is also producing a book as well as a smartphone game that should be ready by Christmas.

The adicolor podcast is a series of seven short films created for adidas to celebrate “colour, costomization and personal expression”. The films were created to be specifically viewed on iPods, PSPs and online, which was still a fairly revolutionary proposition back in 2006 when the films were made. A team of excellent directors was put together, with Neill Blomkamp, Psyop, Happy, Tronic, Roman Coppola and Andy Bruntel, Saimon Chow and Charlie White each given an entirely open brief to create a film based on their emotional response to a particular colour. The podcasts related to the adicolor global digital campaign for which adidas had asked 20 artists to design a shoe based on their response to a colour. The films feature such surreal scenes as an orgiastic dinner party involving green paintball splashes and a pink-loving teenager’s transformation into a bejewelled figurine. With an original goal of achieving one million views globally, the campaign actually achieved over 25 million views in just seven weeks.

Adicolor BLACK
Stills from Saiman Chow’s film for the colour BLACK. The film is a surreal tale about a lonely, crazed panda.

Adicolor PINK
Charlie White directed the adicolor PINK film, which sees a teenager turn into a bewelled figurine while her pink teddy looks on helplessly.

Adicolor BLUE
Psyop is behind the adicolor blue film, where New York City is turned black and white, apart from the odd splashes of blue.

Adicolor GREEN
Adicolor green by Happy shows a space-age dinner party where everything gets a little out of hand after some green treats are consumed.

Adicolor RED
Roman Coppola and Andy Bruntel created this animated history of the colour red for the adicolor RED film.

This is not ADVERTISING
Create a free website or blog at WordPress.com.