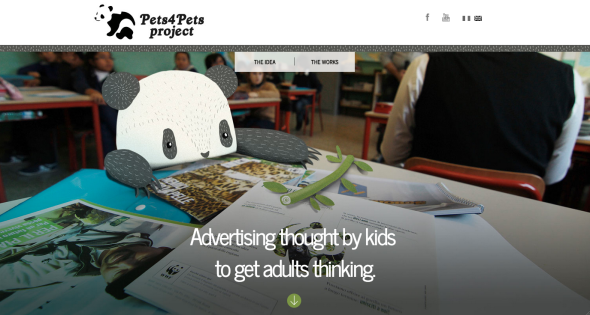 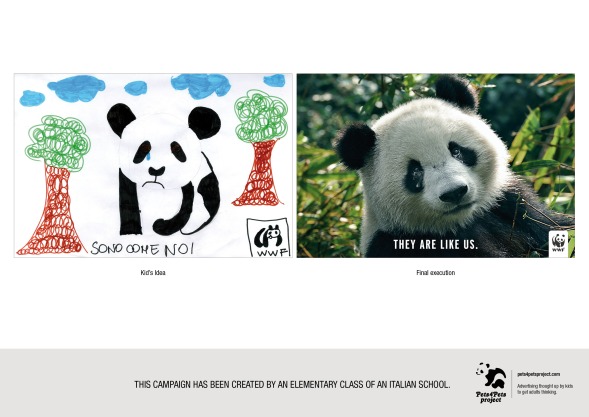 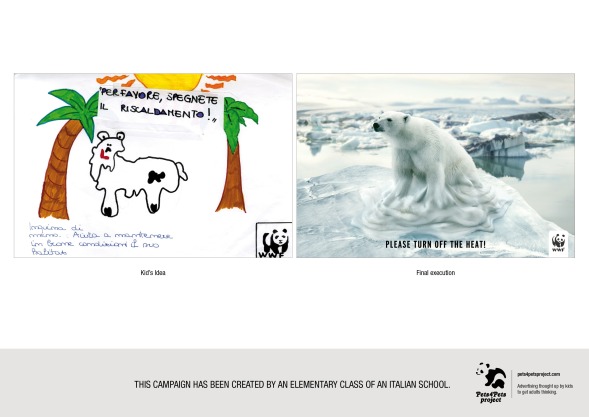 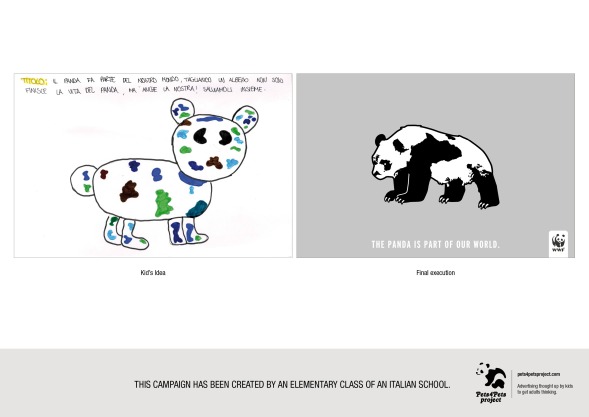 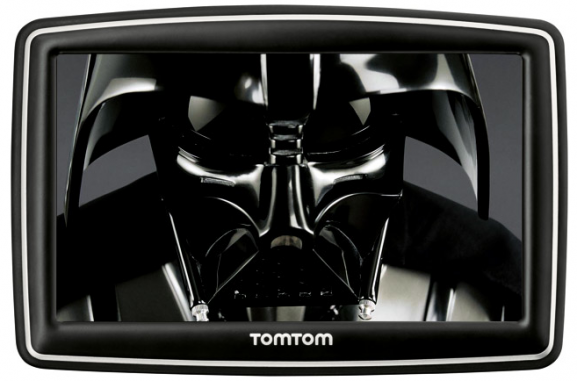 Darth Vader struggles in a sound-studio to give the right driving instructions. We tried to explain the product in the most logical, natural and entertaining way possible, and by simply showing how it was made.
RESULTS: 5 million views combined for both virals, 1500% ROI (one YouTube view being valued at € 0.25), Number 1 & 2 on the Guardian Viral Video Chart. And best of all… Lucas Film requested that the Darth Vader viral and its sister viral starring Master Yoda be included in the Official Star Wars Blue Ray box set. 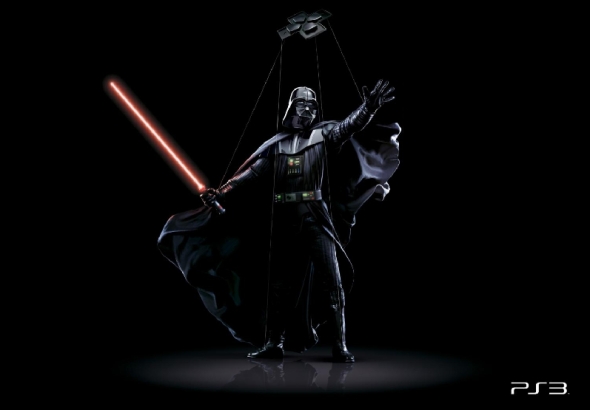 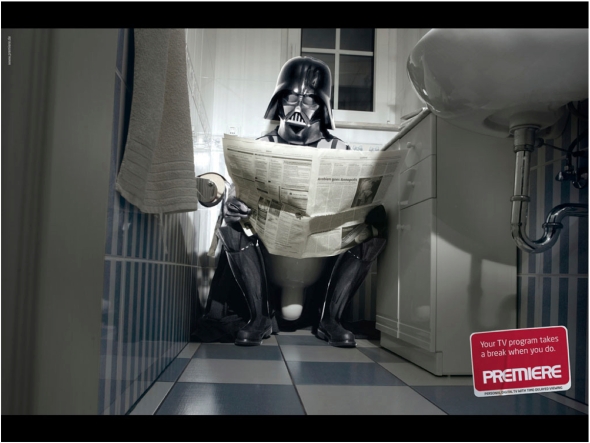 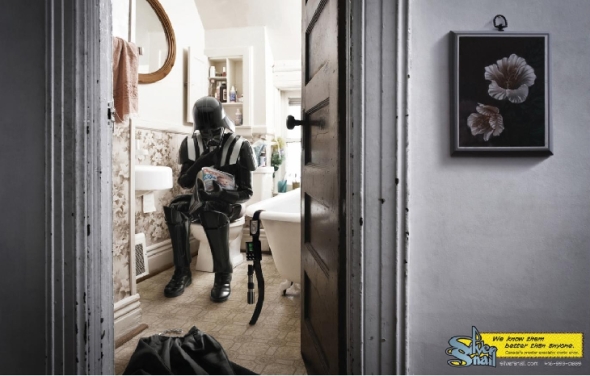 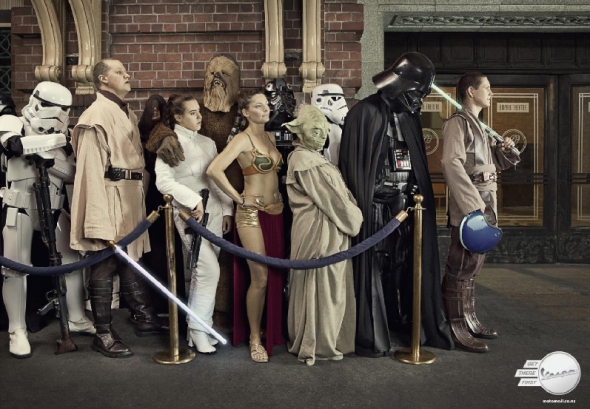 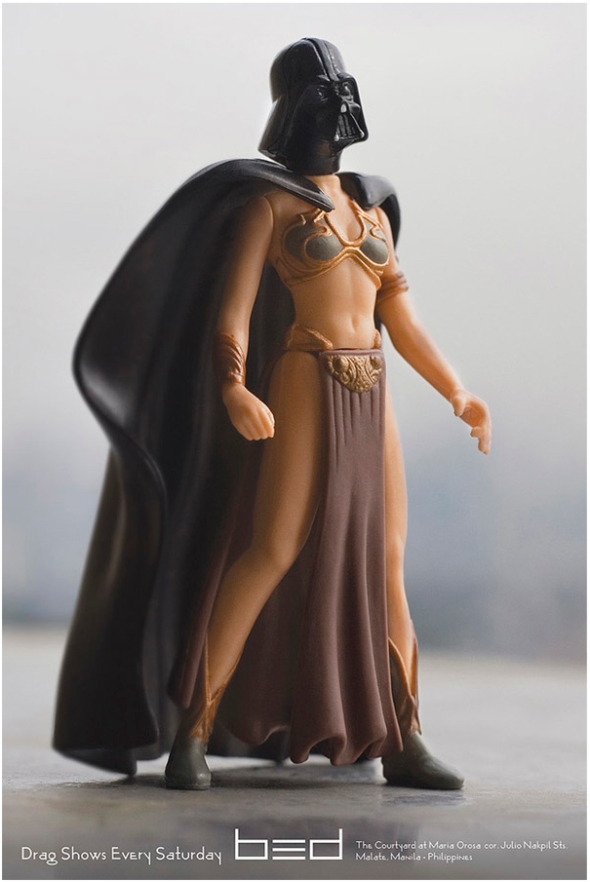 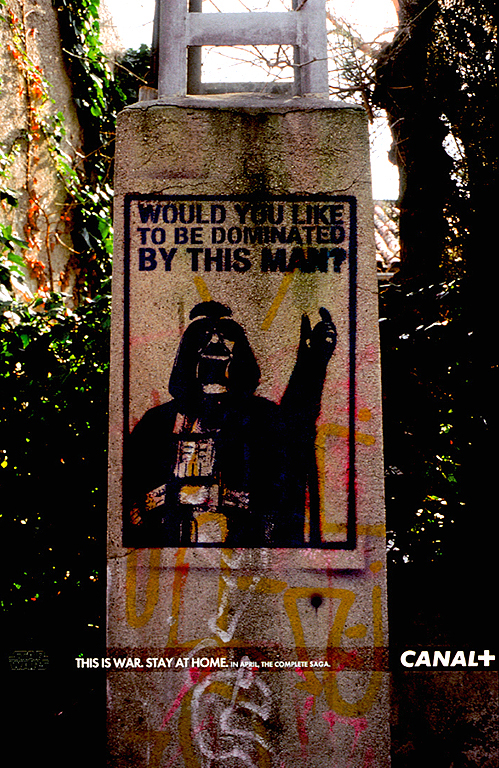 Direct TV (Your movies in the language you prefer) 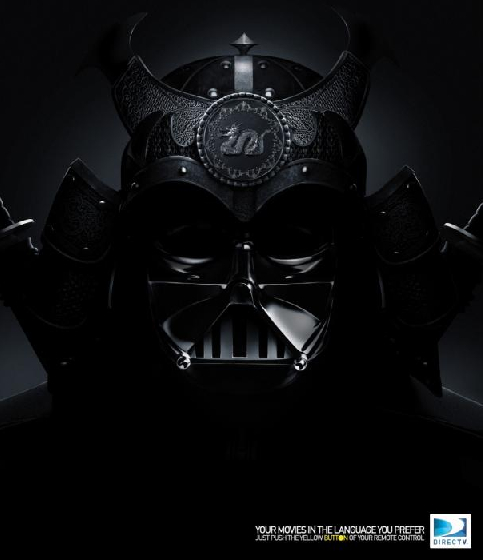 The ‘Goldspot’, so called because of its placement following film trailers and before the main feature, was provided to Orange with just one condition: remind audiences to turn their phones off. The Insight: If there’s one place where consumers reject brand intrusion, it’s in the entertainment arena. It was therefore crucial to make our communication rewarding and relevant to its environment.
Enter the Orange Film Commission Board, a fictitious department ‘inside’ Orange so obsessed with phones that every time a star pitches a project, the characters turn the idea on its head to shoe-horn mobile phones into the plot.

Real product, real client and yes, it really ran. We took the famous scene from Return of The Jedi where Darth Vader’s identity is revealed, and substituted an animated ‘Darth Tater’ Mr Potato Head.

Sexual tension in the workplace. For operator Darth Vader, it’s hard concentrating on intimidating shoppers out of bed before Target’s after Thanksgiving 2 Day Sale with Heidi Klum traipsing around. If she can even rattle the Dark Lord of the Sith, just imagine what she’ll do to you at 5am. 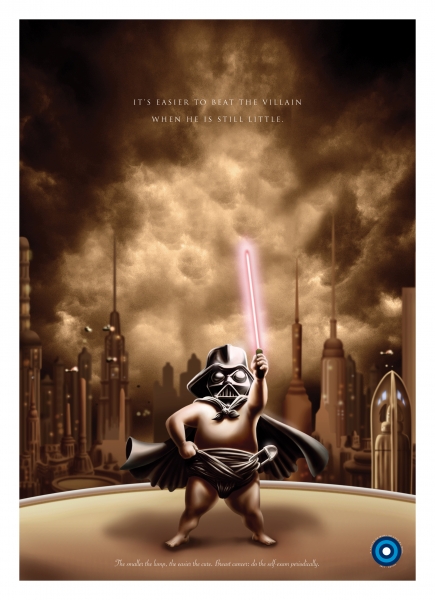 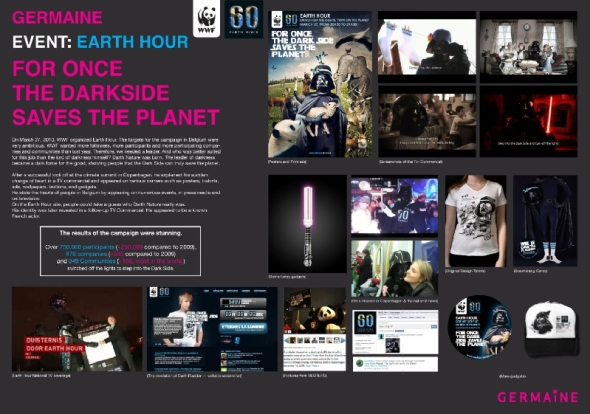 Describe the objective of the promotion.
In 2009 Earth Hour Belgium had 500.000 families, 329 companies and 193 cities participating. The objective was to promote Earth Hour in Belgium to get more families, companies and communities to participate than in 2009.
Describe how the promotion developed from concept to implementation
The campaign started streetwise in Copenhagen, in December 2009. Our Earth Hour ambassador and hero Darth Fladder promoted Earth Hour in the streets and from that moment on, one could follow his adventures on social media (FB, twitter, youtube, Flickr). Cities and companies were approached by mail and phone. From mid February on, the Earth Hour campaign with Darth Fladder was developed in WWF-media, boomerang cards throughout Belgium, website, and e-mails to associations. In March Darth Fladder appeared at some music and sport events and the last 10 days a national TV and radio campaign mobilised the whole country.
Describe the success of the promotion with both client and consumer including some quantifiable results
750.000 people participated (25% more than in 2009), 649 companies (3219 in 2009) and over 324 communities (193 in 2009). So, all significantly more than in 2009.
Contacts:
– 30.096 unique visitors at wwf.be/earthhour
– 1.222 friends on FB
– 85.000 views on youtube (Life of Darth Fladder)
567 publications in on- and offline belgian press.
Explain why the method of promotion was most relevant to the product or service
To get more followers we needed a leader. That’s what we created in the person of Darth Fladder.
And the Belgian population, as well as companies, cities, and families were enthusiastic. Not only had WWF more participants, the participants also used promotion material of Darth Fladder to promote by themselves Earth Hour towards their personnel/habitants/members. 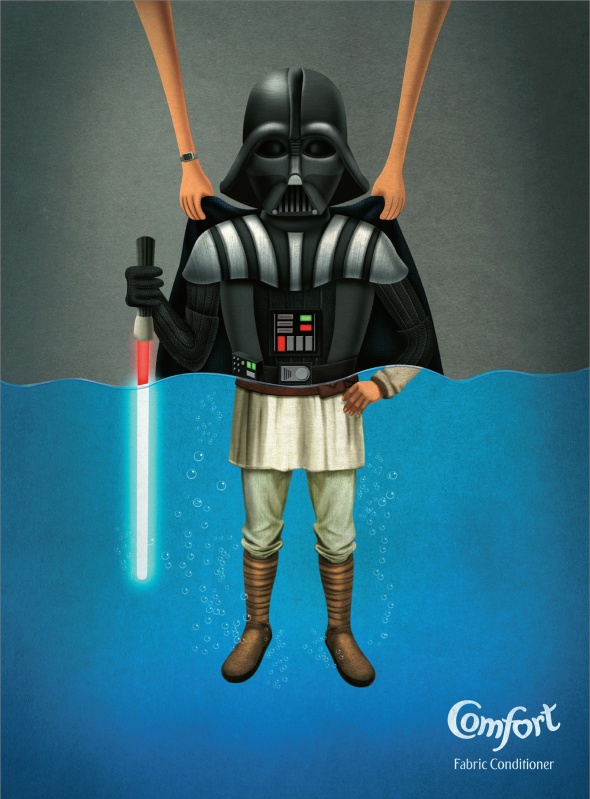 For the all-new 2012 Passat , Volkswagen brings Star Wars™ to one of TV’s most talked about events. Accompanied by John Williams’ iconic “The Imperial March,” the spot features the most infamous villain in the galaxy, a pint-sized Darth Vader who uses the Force when he discovers the all-new 2012 Passat in the driveway. The two iconic brands leverage humor and the unforgettable Star Wars score to create an emotional spot and make Super Bowl ad history. 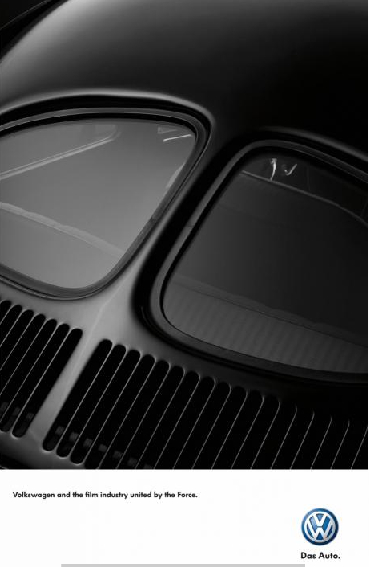 This video from Japanese network DoCoMo is an odd advert, but is so weird that its pretty damned brilliant.Well, they have Darth Vader just hanging around with people using the Galaxy S. There is no real explanation as to why he is there, but he is, and somehow it works out pretty good. Lets face it any advert with Darth Vader in it would cool so sit back and enjoy this. 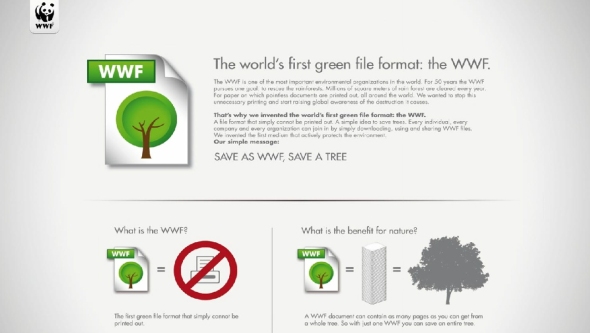 Insights, Strategy & the Idea
Every day, entire forests are cut down to make paper. Paper that’s senselessly used to print out documents all over the world: websites, emails, even entire reports instead of those few pages that are really needed and read. This happens in spite of the fact that it’s easy to avoid printing by saving the document as a PDF. But even PDFs can sometimes also be printed out. So to stop unnecessary printing and encourage a new awareness about the use of paper, we’ve developed the world’s first green file format: .wwf.
A format that can’t be printed out. A simple idea that saves trees. In Hamburg we invited german journalists to a big press conference. Hosted by german WWF chair president and the chair president of the agency. We attracted all big television channels and publishing houses. Not clever communication is our product. This is a clever product communication.
Creative Execution
The WWF Organisation is one of the most important environmental organizations in the world. For 50 years the WWF has pursued one goal: to rescue the rainforests. With this Partner we wanted to raise this important issue . That’s why we invented the world’s first green file format: The .wwf. A file format that simply cannot be printed out. We wanted to put an end to the unnecessary printing and start raising global awareness of the destruction it causes. The product is the message.
Results and Effectiveness
After just four weeks, the website had already welcomed 200,000 visitors from 183 countries, and the software had been downloaded over 30,000 times. On Facebook we’ve got over 10.000 friends.
Just a few days after the campaign was launched, the WWF was THE topic of conversation in the news, in tweets and on blogs across the world.