Droga5, Coke Zero and the Best Slideshare Presentation Ever

This is Droga5′s first work for Coke Zero.

The Brand is using Coca-Cola’s rights as an NCAA official Corporate Champion to tie-in March Madness with its new ‘It’s Not Your Fault’ campaign. Part of the brand’s umbrella ‘Enjoy Everything’ initiative, this new light-hearted, fun creative celebrates ‘guys-being-guys’ as the soft drink brand aims to connect male bonding to college basketball’s end-of-season national championship.

The campaign takes a lighthearted and comedic approach to say that with Coke Zero you can Enjoy Everything in life. “It’s Not Your Fault” also celebrates guys-being-guys. The Enjoy Everything campaign has evolved on the notion of owning quintessential guy moments of bonding and camaraderie, from sports and entertainment to humor, gaming and music. 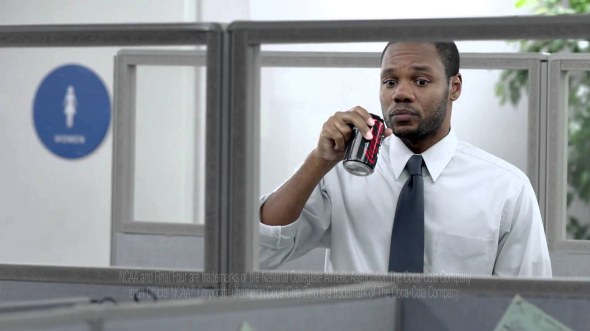 The narrative’s message is simple – it’s not your fault you can’t do anything but watch basketball during NCAA March Madness – and the work has been created in partnership with creative agency Droga5 New York, media agency Starcom MediaVest Group, Turner and the NCAA.

Follow up commercials within the campaign also include Gumbel, Schedules, Emotions, Scholastics, History, Statistics and Technology

Another strand of the campaign sees Coke Zero partner with talk show host Conan O’Brien: the TV chat star, whose evening show will move from LA to Atlanta for selected programmes during the tournament and will be sponsored by the soft drink, will appear in a bespoke Coke Zero TV spot towards the culmination of the competition and the brand’s “It’s Not Your Fault” campaign will link with the show. Coke Zero is also backing a Conan music series with performances in Los Angeles, Austin and Atlanta. Andy Richter, the Conan sidekick, will emcee them. Big name musicians are also set to headline the ‘Conan Coke Zero Music Series’ on the ‘Road to the Final Four’, while Coke Zero and Conan are also co-creating a bespoke ‘It’s Not Your Fault’ promotional spot. 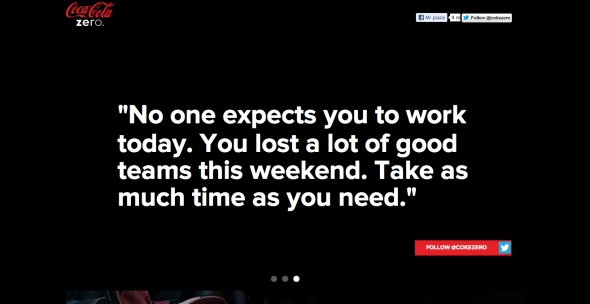 This presentation offers a detailed exploration into all the reasons why man is unable to do anything but watch basketball during the NCAA tournament… View the presentation on Slideshare: http://CokeURL.com/nl4t

“Coke Zero has experienced quarter after quarter growth and success, and we hope to see this campaign continue the momentum. ‘It’s Not Your Fault’ is launching in a big way through universal guy assets like NCAA March Madness and a co-branded promotional spot with CONAN,” said Andy McMillin, VP, Coke Trademark, North America Group. “Coke Zero brand attributes are well established, now it’s time for the brand to make the next big leap to connect with its drinkers. The brand definitely is evolving.”

Coke Zero is out to create an international dance craze–and remake its marketing process– via the Make It Possible Project,  a campaign that came together organically over the course of several months with input from Coke fans around the world.

Eschewing the traditional advertising model, the brand instead used its Makeitpossibleproject.com storytelling platform to experiment with content creation relying on public participation: “Consumers can see through these marketing platforms, so why not genuinely bring them into the process so they’re part of the marketing community?” says Jonathan Mildenhall, VP of Global Advertising Strategy and Creative Excellence at Coca-Cola, stressing, “I view every single [member] of our community as a marketing director for the Coke Zero brand.”

This worldwide network of marketing directors got to work late last summer on a campaign orchestrated by Coke agency Ogilvy Paris. The project kicked off when director Jon M. Chu, creator of The Legion of Extraordinary Dancers web series, went online at Coke Zero’s behest to announce that the soft drink was on the lookout for a hot new original dance (Mildenhall was actually inspired to make dance the central theme of the project after a chance meeting with Chu at the Consumer Electronics Show in Las Vegas last year).

Choreographers and dancers of all experience levels were invited to upload videos to MakeItPossibleProject.com showing off their best moves, and as the submissions came in from around the world, Chu as well as members of The Legion of Extraordinary Dancers provided encouragement through video messages. Meanwhile, the Make It Possible Project community liked, shared, and debated the merits of the dances. In the end, it was the Toe Tappy, a side-to-side toe-tapping dance created by American street dancer Joey “Knucklehead” Turman that won Coke Zero’s interest.

Convinced that the Toe Tappy had the potential to catch on, Coke Zero then initiated a casting call, reaching out to its online community in search of a performer who could bring the dance to life as the star of a global ad campaign. Again, anyone could apply. “At every stage of the creative development process, we were helping members of our target audience realize their ‘what’s possible,’” Mildenhall says, noting that a group of finalists from the community were flown to Los Angeles, where they were photographed for an out-of-home campaign–think everything from posters to in-store displays–and provided with behind-the-scenes video to share through their social networks.

Keemo, an actor and dancer from France, ultimately became the face of the campaign, winning the lead role in “A Step from Zero,” a web film that broke today on Coke Zero’s YouTube channel Directed by Nima Nourizadeh out of production company Partizan in Buenos Aires (Coke also worked with Stink Digital for interactive components and Opus 88 on out of home) and featuring a track titled “I’m All In” by up-and-coming rapper Metis, the film casts Keemo playing a young man whose family doesn’t support his ambition of becoming a professional dancer. He eventually wins their approval after he creates a dance–the Toe Tappy–that spreads all over the world thanks to the Internet. (The web film was also cut into 60- and 30-second commercials.)

The narrative is loosely based on Knucklehead’s personal story, which is shared in more detail on the Make It Possible Project site through a short documentary-style film. It provides a raw portrait of a young man who survives a rough childhood and makes his way to a better life through dance. Knucklehead, who, incidentally, competed on MTV’s America’s Best Dance Crew with Street Kingdom, is also featured on the site in a series of videos that show him traveling the world, from Japan to New Zealand, teaching people the Toe Tappy, and he also got people buzzing about his dance via social media.

The young influencers who make up the Make It Possible Project community have shown great interest in the aforementioned content. In fact, according to data culled from the site, visitors spent an average of six minutes on MakeItPossibleProject.com during the content creation portion of the campaign, with peaks running as high as nine minutes.

Given the success of the endeavor in terms of engagement, Coke Zero is now looking to take consumers on additional creative journeys via the Make It Possible Project, giving them an opportunity to pursue their own passions and play a role in shaping and sharing the marketing messages aimed at them. “You can rest assured that the next tale of possibility will have a ringleader like Jon Chu, we’ll activate the community, we’ll source authenticity from a community of believers as we go through the process, and hopefully, we’ll realize the dreams of several people,” Mildenhall says.

The approach confirms Coca-Cola’s commitment to its content 2020 manifesto which outlined a long-term, company-wide marketing plan that is less reliant on traditional advertising and more invested in generating content that can flow through any medium while reinforcing the company’s business objectives.

“For Coke Zero, I never want to go back to a traditional hidden creative development process,” Mildenhall says. “I always want to engage with the community in helping us find the talent and find the stories and find the creative elements. It’s just so much more rewarding.” 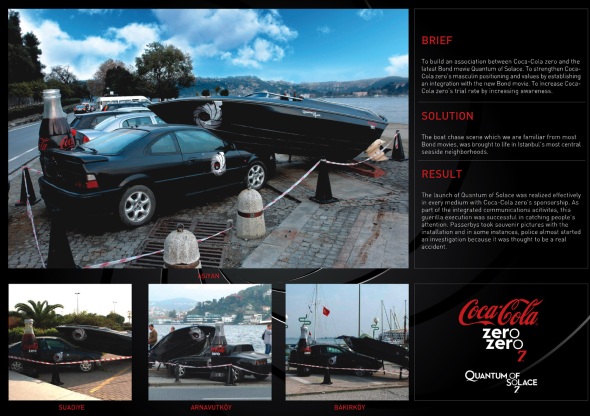 The Brief
Table football is one of the most liked socializing games in pubs, bars, workplaces, schools, and clubs with few rules. But there is one rule since the beginning: only four people can play the game. In order to show the target people that there are zero limits and rules we invented the new breed of the game: the Zero foosball which has 3 sides to accommodate 6 friends. Coke Zero is the biggest invention of Coca Cola lately. Coke Zero: real Coke taste, zero sugar. The brand aims to drive back young male adults to the Coke franchise. In the age of 18-25 guys leave their childhood and step into the adults’ world of obstacles and limitations. Coke Zero wants to help them see, imagine more possibilities in life than they think. If Coke Zero is possible anything is possible. The challenge was to bring the brand purpose into life via transforming limitations, norms, rules into new never seen positive experiences.

The Idea
After having the idea, we had to make it real. Several engineer groups worked on the plans for one month, we even involved the Hungarian foosball association. To reassure about the design’s enjoyability, we invited an ultimate expert for a final check.

Results
..zero foosball debuted on the most popular Hungarian music festivals.
We managed to invent a unique design medium, which not only transferred clearly the brand essence, but provided a surface where every player spent at least 15 intense and joyful minutes with the brand. It created excitement for more than 520 000 people on the spot, and the WOM even doubled the reach. The new phenomenon quickly spread on the target group’s most visited sites. The festivals already indicated their interest for the Zero foosball for the upcoming year. No one could just pass by our never seen design and game innovation. 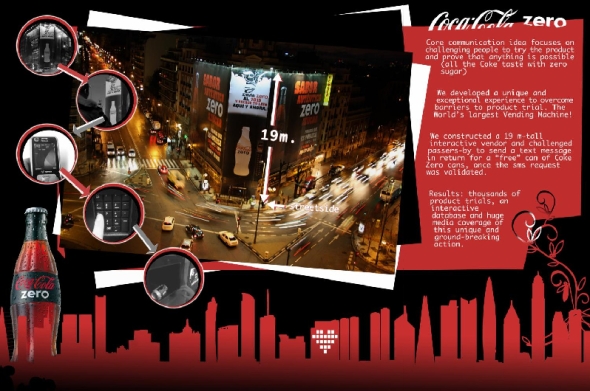 Original taste. Zero sugar. Prove it’s possible. Send “ZERO” to 7015 and pick up your can here and now.

The Brief
Coke Zero’s communication effort was to build on the equity of “making the impossible possible” which is true to what the brand promises (having that real Coke taste with zero sugar). All materials, even point of sale, had to reflect the proposition. In supermarkets and groceries where everything would blend into the shelves, it seemed impossible to stand out. Our task was to disprove that.

The Idea
How to create something impossible, then make it possible AND functional? We needed to stop shoppers in their tracks the moment they saw the product. So why not use the product itself and stack them all in a big pyramid – then turn the whole thing upside down.
Careful planning and collaboration with groceries had to be made. A pole designed as the bottom-most Coke Zero can ran from the ground up, supporting the whole structure. The shelves were made so thin, they almost looked invisible. And stock boys were instructed to constantly replenish cans to maintain the pyramid’s form.

Results
The Inverted Pyramid display vividly separated Coke Zero from the sea of sodas in the shelves. Clear proof was the 13% sales increase in supermarkets and groceries since installation of the special stands.
The proposition was brought to life in-store. Shoppers experienced the impossible made possible first hand as they shopped and picked up products from the display.