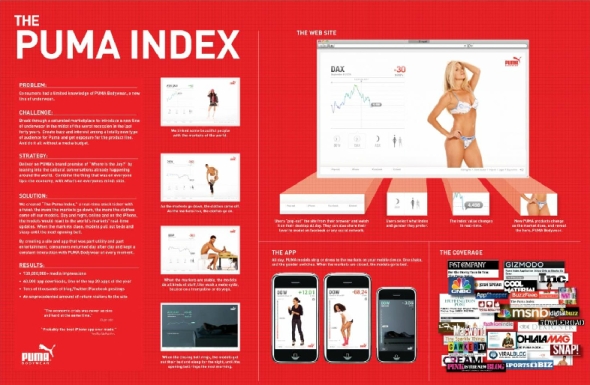 Summary of the Campaign
To launch the new Puma Bodywear collection, a range of sporty garments available in stores globally, with no money. Create a huge buzz with a very small budget, and create something with a fun news spin on a depressing, repetitive story. Launch date was Fall 09, in the depths of the worst economic crisis. We observed that underwear ads followed consistent rules: half dressed pouty girls, serious photography and were limited in engagement. Based on the brand positioning “Where is the Joy”, our strategy was to bring joy in an unexpected moment that would find its way into a cultural conversation.
We created “The PUMA Index,” a real stock market ticker with a twist: when the market went down, the models clothes came off, right down to their PUMA underwear. The campaign has made over 130,000,000 impressions, the iPhone app was one of the top 20 apps and was downloaded over 40,000 times, and the website became one of the most talked about sites in national media and on social networks. One impatient fan even broke into the site to steal the files of one of the models in his PUMA skivvies.

The Situation
The problem was the financial meltdown. the story came from the unique fun way in which Puma approached it – creating a useful utility while bringing a smile to everyone’s faces. With no media spend and to launch the new Puma Bodywear range to a global audience. The opportunity for Puma was to deliver on its brand promise of “Where is the Joy” by leaning into the cultural conversations already happening around the world.
And we had to do it with no media budget.

The Strategy
Initial planning was based on discovering what our target was interested in and cared about. We then had to create something that would go viral in their world. Next, our plan was to seed the campaign in a few key places and coordinate a PR push along with specific ads on PUMA.com to create initial buzz about the idea. After that, our plan was to build on the momentum and encourage the mass media to pick up the story for added buzz. Finally, we hoped to achieve enough success to continue to evolve the idea.

Execution
Early planning successfully identified our target and informed the creation and production of our content. Initial seeding and PR push succeeded in lighting a spark on the app/site that soon went viral on its own. Soon, mass media was reporting the site and helping spread the word. The plan pretty much stayed true to form throughout. 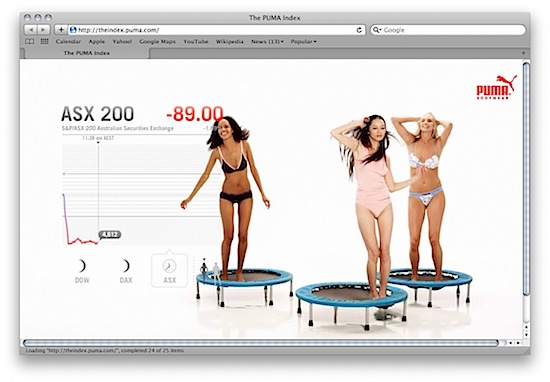 The Goal
Our goals were three fold:
Drive awareness of the Puma’s new Bodywear range to a youth audience in key markets,
Reinforce new Puma brand positioning “Where is the Joy”
Ultimately drive sales of the product

The downturn in the economy had put the state of finance into the mainstream water cooler conversation. Research showed that finance apps were consistently in the Top 50 most sold on iTunes…But while finance had reached new cultural relevance with new audience, the media and apps consumed still treated the story like one big spreadsheet. It was through this cultural and competitive analysis that we came to the key insight that the financial world was in the need of some Puma Joy.

“We’ve seen a lot of branded applications and a lot of them play it too straight down the middle,” said Antonio Bertone, Puma’s chief marketing officer. “We thought that if we could do this right and have models take off clothes when the market was going down, this could really work.”