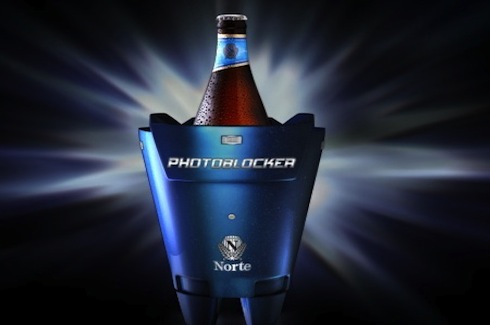 One of the great ironies of our time is the sheer number of Facebook users who label their debauched post-Las Vegas photo albums some variation of: “What Happens in Vegas…” Obviously, very little that happens in Nevada’s party district, or anywhere else, manages to stay there these days. As long as cameras are on hand to capture the evidence, and social media networks exist to distribute it, the days of worry-free decadence are gone. Or are they?

The cumbersome object–it looks to be the size of a wastebasket one might keep atop their office desk–not only serves as a functional temperature-preserving beer cooler, but it also works to preserve nightclub anonymity. Photoblocker detects camera and cell phone flashes in 360 degrees, reflecting back a powerful flash that instantly destroys all attempted photos.

We’ve seen photoblocking technology applied in the automotive sector, as a speeding ticket evasion mechanism, but this may be the first bar-centric application. The agency says the device, which has so far only been planted in regional bars, is a real product that has been field tested and actually works. “We placed several beer coolers in different bars in the North of Argentina,” says Maxi Itzkoff, executive creative director at Del Campo. “People took lots of photos that ended up being blurry beyond recognition and then uploaded them to social media anyway.”

In an ad promoting the brand and the new “utility,” provocatively dressed women dance with abandon in a club while the surrounding men (who look distinctly married in some cases) stand at attention, ready to pounce. Meanwhile a screencrawl informs the viewer that in 2011, technological advances and social networks can now turn a night out into… hell. Next, an interloper with a camera snaps a series of pictures illuminating the negative consequences of being caught on film in such a setting. As luck would have it, though, the patrons of this club are protected by Photoblocker, and the resulting snapshots are flooded with white light.

Del Campo is known for beer campaigns that combine innovative tech with uncommon social savvy and PT Barnum-like stunting (the agency also just created a new microwave oven upgrade). For Anheuser-Busch Inbev’s local beer brand Andes, Del Campo created a booth called the Teletransporter that the agency brought to several bars in the city of Mendoza. Male bar patrons were able to loudly enjoy some Andes beer with friends before ducking into the Teletransporter booth and selecting innocuous background noise, allowing them to deceive their wives or girlfriends as to their whereabouts. Okay, the concept isn’t exactly progressive, but it won a lot of awards.

Norte’s Photoblocker is similarly innovative, but it’s gender-blind usefulness ensures that it will be enjoyed by anyone at all who values privacy along with their pilsner.