A robbery. A burger. A dance contest. An overdose. A shot in the head. A robbery. Watch Hollywood’s legendary blockbuster “Pulp Fiction” in 30 seconds. Short and fun. Just like the VW Fox.

An obsessed girl. A priest. An expulsion. A dead priest. Watch Hollywood’s legendary blockbuster “The Exorcist” in 30 seconds. Short and fun. Just like the VW Fox.

A space ship. An alien. A nightmare. One survivor.
Watch Hollywood’s legendary blockbuster “Alien” in 30 seconds. Short and fun. Just like the VW Fox.

A princess. A dark lord. A Jedi. A death-star. A battle. A happy end. Watch Hollywood’s legendary blockbuster “Starwars” in 30 seconds. Short and fun. Just like the VW Fox. 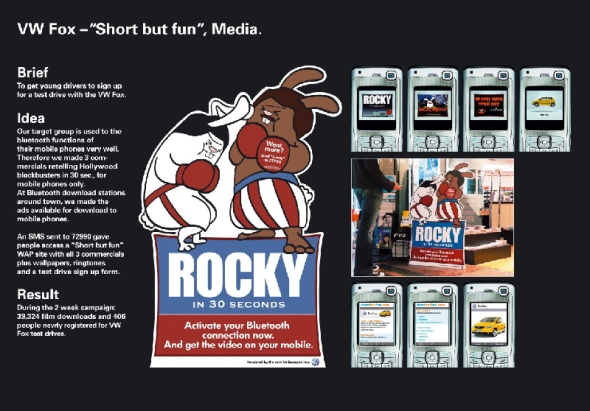 CASE HISTORY
Question: What do one German mini-car, six Hollywood blockbusters and a fast-talking cast of cartoon bunnies have in common? Answer: They all figured prominently in a wildly original and successful TV advertising campaign that last year earned a Gold World Medal in the International Awards Group’s 2006 Advertising and Marketing Effectiveness (AME) Awards.
The mini-car in question is the Volkswagen Fox, a sporty compact car aimed at youthful, first-time car buyers. The ad campaign, created for Volkswagen AG by DDB Düsseldorf and built around the tagline “Short but Fun,” featured 30-second, animated versions of six international film hits, including Titanic, Jaws and Pulp Fiction. And the bunnies? They took the place of the films’ human characters, adding an element of the outrageously hip to the spots that captivated German audiences during the campaign’s brief, four-day run.
The AME Awards committee, comprised of a multi-cultural and international cross-section of top marketing executives, recognizes integrated marketing campaigns that are fresh, creative and above all, successful.  Campaigns that demonstrate innovative problem solving, and that achieve specific business goals using well-crafted concepts, inspired marketing strategies and an effective combination of traditional and/or alternative media tactics.

Volkswagen’s “Short but Fun” campaign met all these criteria, achieving extraordinary, measurable results for the German car manufacturer that exceeded its campaign objectives and proved it could capture an audience of very critical media users on a very tight production and media budget.

A Clear Objective
Volkswagen introduced the Fox in the spring of 2005 into the price-driven mini-car segment. Despite Volkswagen’s premium image and the Fox being slightly higher priced than the competition, it soon became the market leader.
The launch campaign emphasized the idea that in opting for economy, buyers would not have to compromise quality and reliability. This notion appealed to buyers at all levels, however the next phase of communication would need to sharpen the Fox’s profile among its main target audience: youthful, first time car buyers between the ages of 18-25.

A Moving Target Audience
While highly desirable, this group is the hardest to reach through traditional advertising methods. They have grown up being bombarded by messaging from multiple communication channels and have a very short attention span. If content does not grab them immediately, they turn elsewhere.  DDB faced a formidable challenge in coming up with a strategy to capture their attention and motivate them to action.

Inspired Creative Strategy
“We developed a very creative positioning for the VW Fox: short but fun,” said DDB’s Luis Ramirez.  That’s the message we wanted to communicate: a small car that is fun to drive and does not cost a fortune.  The ideal car for young people.”
The ‘Short but fun” positioning also was developed to differentiate the Fox from its competitors’ cliché lifestyle advertising, which implies that one need only drive a certain car to be more active, attractive and popular. Rather, the ‘Short but fun” messaging conveyed that driving a Fox provides a concentrated, intense form of fun that doesn’t depend on others’ approval; the type of enjoyment that young, upwardly mobile people seek.
In order to illustrate this concept, the agency teamed with artist Jennifer Shiman, whose 30-second, animated versions of cinema classics – starring floppy-eared versions of Hollywood’s A-list – were sure to stop young, media-savvy consumers in their tracks.
“To get this target group excited about the Fox, we created a funny communication platform: http://www.shortbutfun.com,” said Ramirez. “There, site visitors could find a variety of short and fun content, including short films. So we were looking for endlessly long films, told in a very short time.  When we discovered the movies of Jennifer Shiman on the Internet, we realized that they perfectly matched our positioning and had to part of our platform.  We contacted her and discussed a potential cooperation.  She was very excited to work with us. We had to animate and cut the films created by Jennifer so that they matched with the already shot Fox ending. The result: six crazy films, loved by everybody.”
An interesting note: though the commercials appeared only in Germany, they were run in English, in order to speak pointedly to the young target audience.

Innovative Media Strategy
In order to keep media costs down, DDB decided to air the commercials for only four days and make the Internet the main communication channel. This was a risky decision, however the concepts and creative were so strong that DDB felt that viewers would flock to the Fox’s microsite to see more. To ensure that the campaign reached the maximum number of desired audience members, the agency chose a very targeted media strategy, running the commercials on music channels such as MTV, and choosing weekend spots during entertainment shows rather than mid-week spots between shows.
Once on the “Short but fun” web site, viewers could watch all the commercials as movie streams. In order to engage the viewers further, they were asked to rate each commercial. In addition, a banner ad with a link to the Fox product web page was prominently positioned on the home page so that users could learn more about the Fox.

Dazzling Results
The primary, direct communication objective of the “Short but fun” campaign was to generate 20,000 visits to the shortbutfun.com homepage. Within only four days, over 31,000 visits were counted, exceeding the original goal by 56 percent.
The agency also projected the campaign would generate 2,000 email addresses and increase traffic to the Fox product web page by 10 percent.  After four days, over 8,000 users provided their addresses in order to receive more information, and the number of visitors to the web page increased by 37 percent.
Further, qualitative research indicated high recall and positive reactions among viewers, demonstrating that the campaign did indeed achieve its objective of raising the Fox’s profile among young, first time car buyers.