← 10 Best Japanese Commercials
Combos – What your mom would feed you, if your mom were a man →

An extremely clever ad — one from your childhood. A slightly surreal look at all the things you can make out of a box a Lego. Narrated by Tommy Cooper, a battle ensues between a mouse which, when threatened by a cat, turns into a dog. The cat turns into a dragon and so on, to a submarine and a submarine-eating kipper. The submarine eventually morphs into an elephant, the mouse rebuilds and the elephant faints. Lego: It’s a new toy every day — just like that!
Agency: TBWA London
Creative: Mike Cozens; Graham Watson
Director: Ken Turner
Production: Clearwater Films
Producer: David Mitten
Director of Photography: Tom Harrison
Editor: Patrick Udale
Year: 1981
Grand Prix 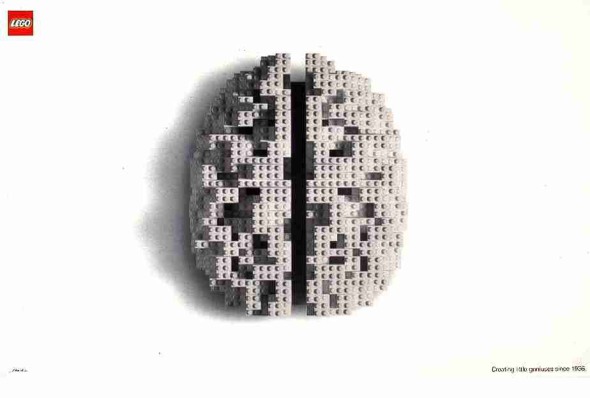 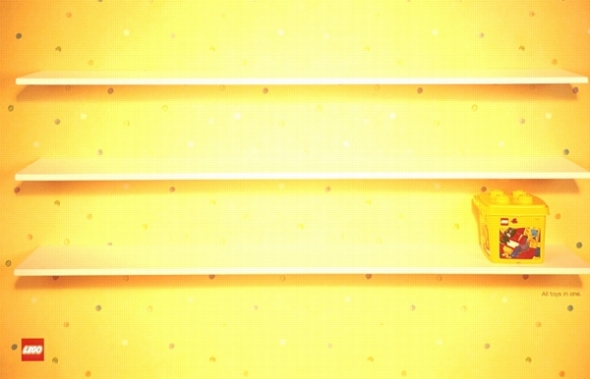 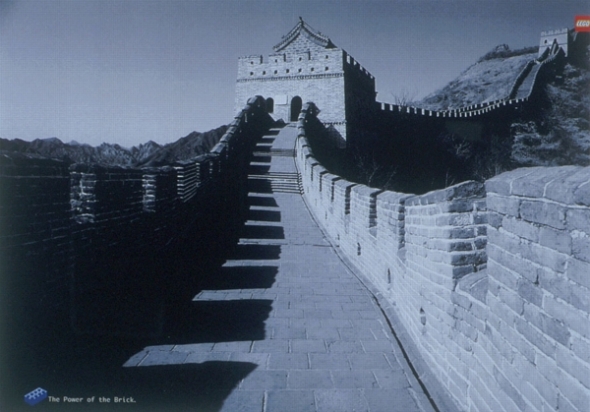 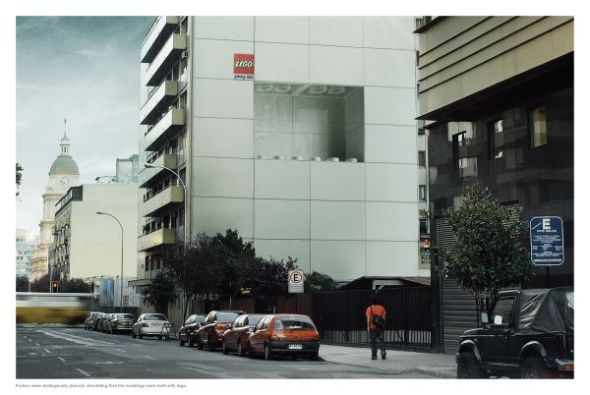 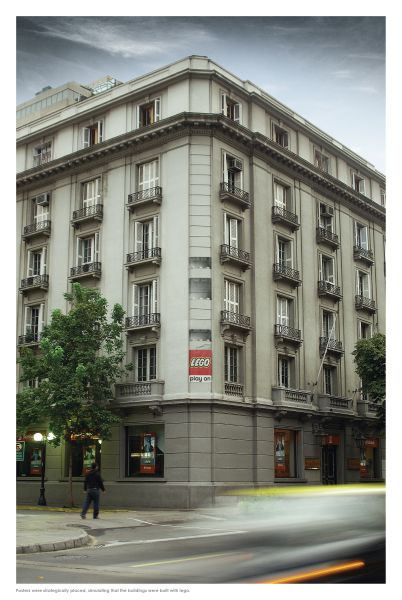 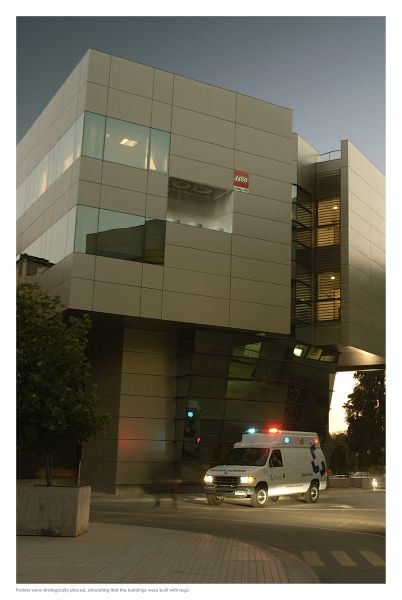 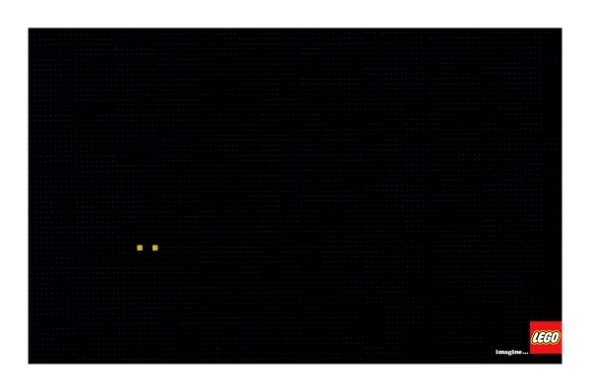 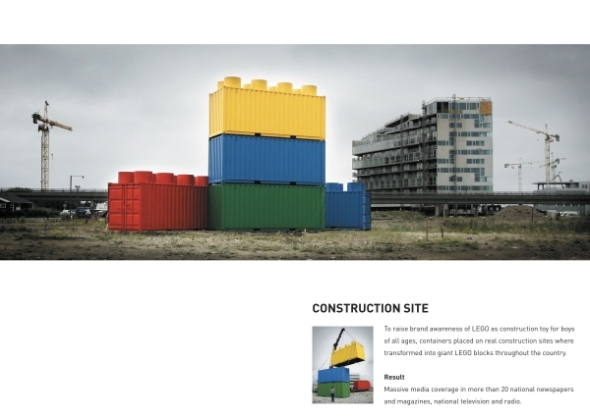 Describe the communication goal
LEGO wanted their communication to focus more strongly on the core product: the basic blocks. And at the same time, they still wanted to inspire children of all ages and to stimulate creativity and innovation.
Innovative Media Strategy
Construction sites are normally very boring and makes the surroundings ugly. But by turning the containers placed there into giant LEGO blocks it gave consumers a surprise, making their everyday life a bit more colourful and creative. They could “play on” themselves and start imaging how to build on. As one consumer said: “I was just standing there, waiting for a giant boy to come and build”. The media became the talk of the town. Even the Mayor of Copenhagen was proud of what it did to the city and praised it in several newspapers and television.
Engaging Creativity
LEGO is known for stimulating creativity. Transforming containers on construction sites across the country into giant, colourful LEGO blocks confirmed this for the consumer. And with no logos it also became a pleasent surprise in their everyday life. Was it and ad or wasn’t it? Nobody doubted that LEGO was the brand behind it though.
Encompassing the Audience
By turning containers into outstanding giant LEGO blocks it gave consumers a big surprise, making their everyday life more colourful and creative. In several weeks, the LEGO blocks became the talk of the town.
Effectiveness
– Massive media coverage in more than 20 national newspapers and magazines, national television and radio
– City mayors praising the project
– Hundreds of thousands consumers travelling by the blocks led to maximum awareness on the communication goal. 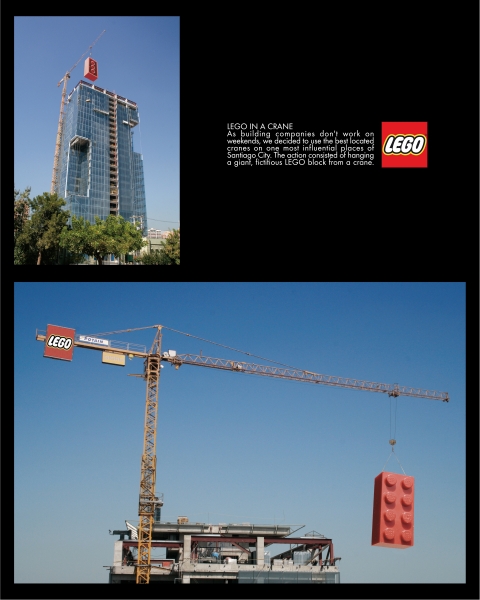 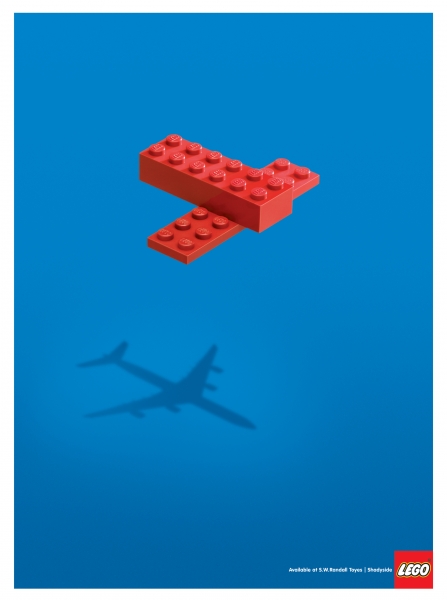 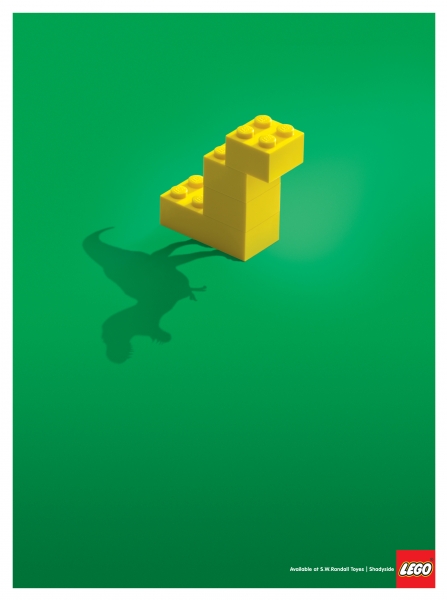 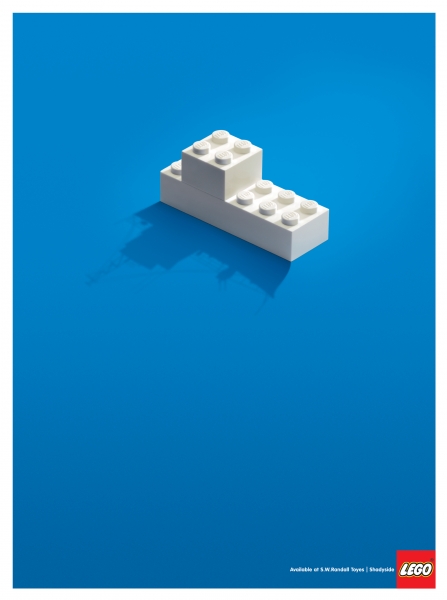 Describe the objective of the promotion.
Like no other toy, LEGO is a symbol of fun and creativity. To mark the fiftieth birthday of LEGO in Germany, the idea was to rekindle media representatives’ and LEGO partners’ excitement for LEGO with a high-quality mailing.
Describe how the promotion developed from concept to implementation.
LEGO fan and designer Reginald Wagner conceived, designed and photographed his personal LEGO memories with a pinhole camera to keep them from fading. The book’s format is adapted from the form of an individual LEGO brick. The book cover and the flipside are made of real LEGO plates. Journalists were sent the book and could put their name on the cover and share their memories with the designer.
Explain why the method of promotion was most relevant to the product or service.
The title of the book POLYPLAYPYLENE means “plastic that has been played with often” and that’s precisely what this book is about. Endless imagination, an endless number of construction combinations and stories from the LEGO worlds: towns, castles and space.
Describe the success of the promotion with both client and consumer including some quantifiable results.
The first, exclusive edition is out of print; the feedback was overwhelming. A paperback edition of “Polyplaypylene” is currently in print for wider circulation.
Agency: Kolle Rebbe Werbeagentur GmbH/Korefe
Creative Director: Katrin Oeding
Copywriter: Alexander Barom
Art Director: Reginald Wagner
Photographer: Reginald Wargner
Year: 2007
Shortlist 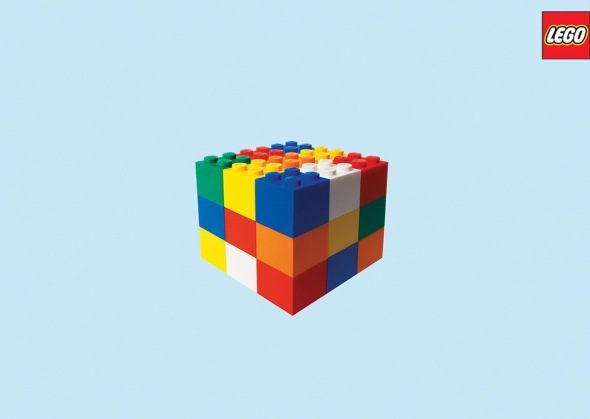 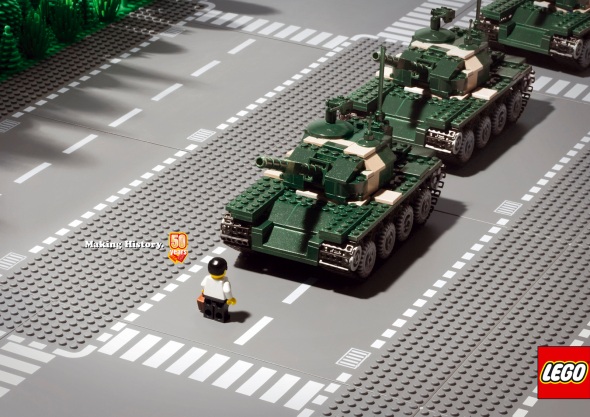 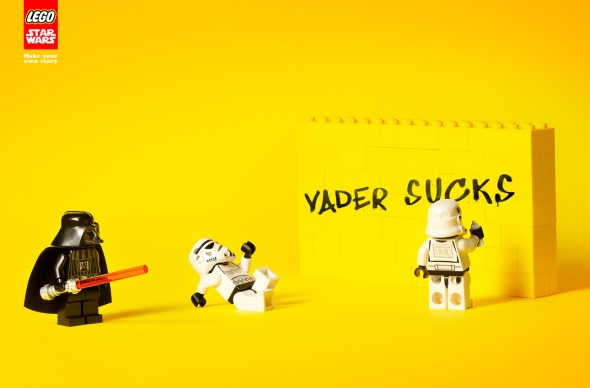 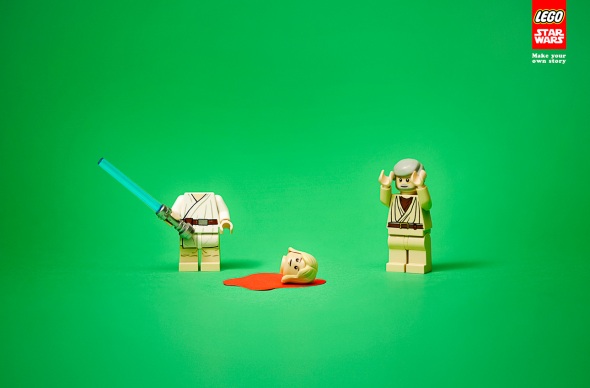 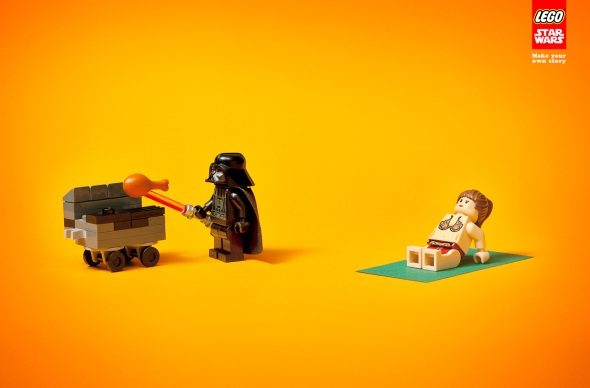 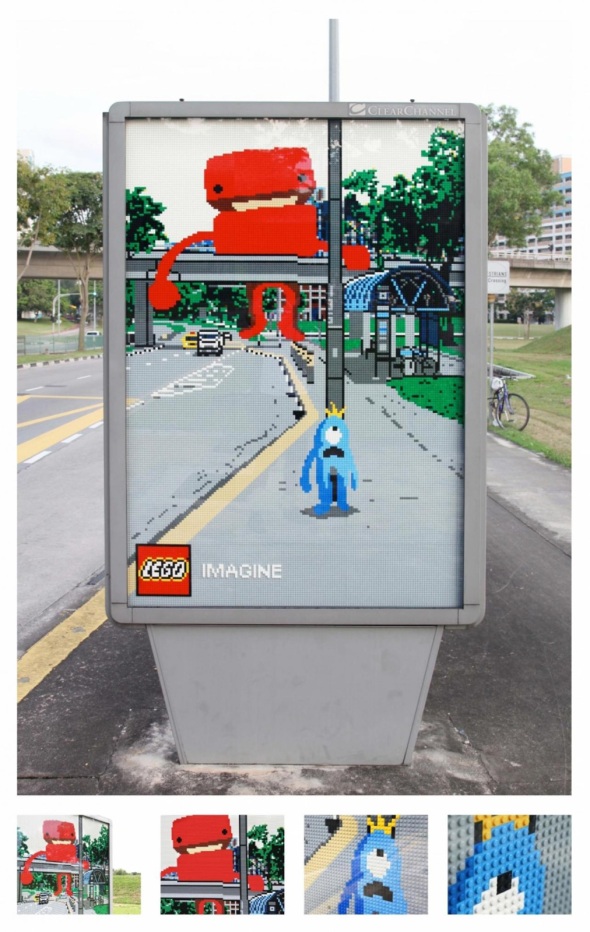 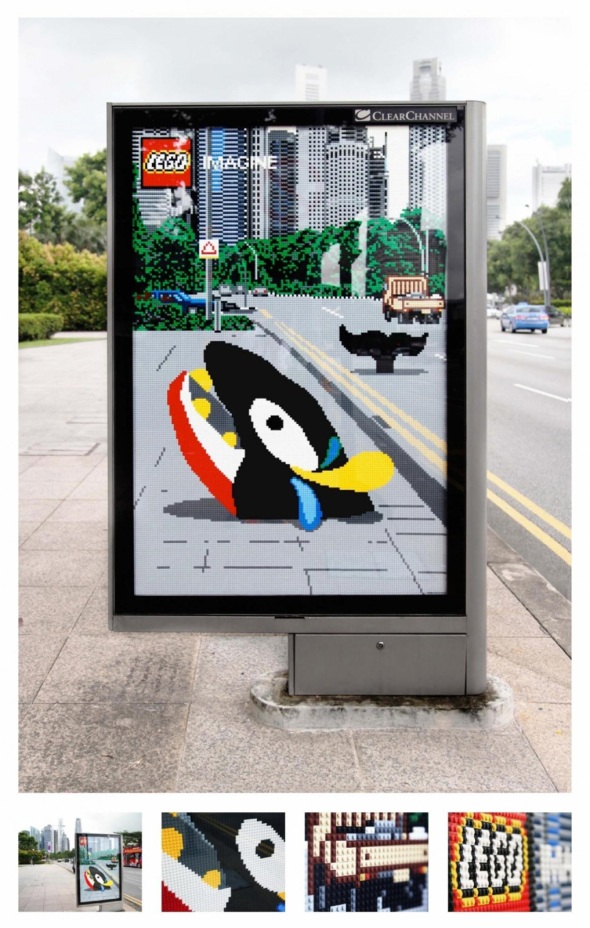 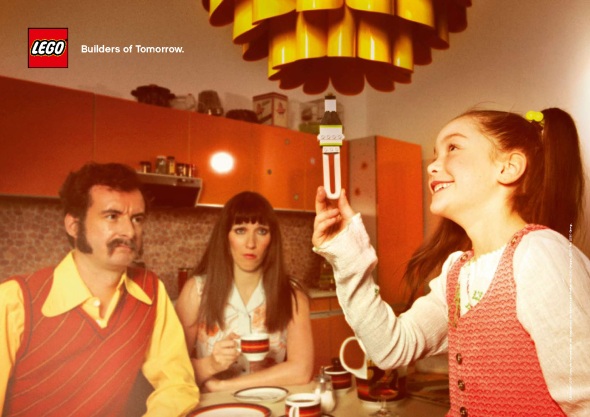 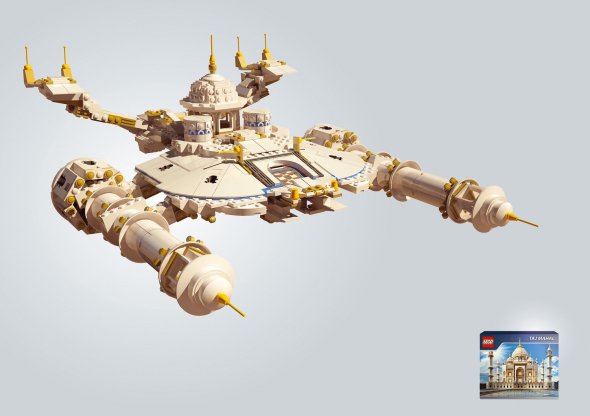 The ads appeared on four consecutive pages. LEGO is a company that has fostered imagination, invention and creativity for over 60 years. So it is unusual for these ads to feature only long copy with minimal imagery. However, upon reading each of these scenarios the ad comes to life in a way that is unique only to the reader and how they see these playtime scenarios in their mind’s eye. Typographic elements of kerning contrasted with tracking allow the reader to almost get lost in the copy selecting keywords for their imagination. The fourth ad in the series, “Yellow Brick” features a notepad with the tagline “Every LEGO brick tells a story. Build yours.”